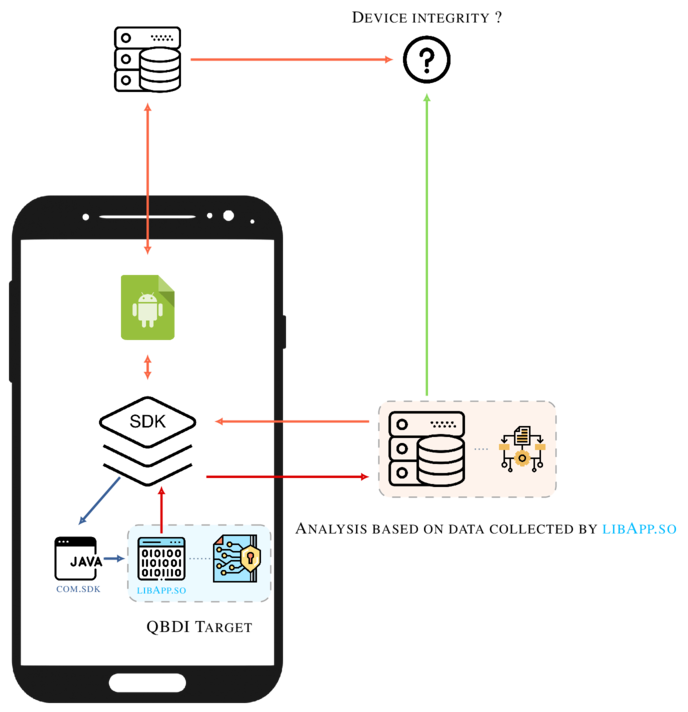 This post has been originally posted on the Quarkslab’s Blog

During the past few months we improved the ARM support in QBDI. More precisely, we enhanced the QBDI’s engine to support Thumb and Thumb2 instructions as well as Neon registers.

Development is still in progress and we need to clean the code and add non-regression tests compared to the x86-64 support.

To add Thumb and Thumb2 support, we tested the DBI against well-known obfuscators such as Epona, O-LLVM or Arxan, as we could expect good instruction coverage, corner cases and nice use cases. The native code came from Android JNI libraries embedded in different APKs.

This blog post introduces some QBDI features that could be useful to assess native code and speedup reverse engineering. To expose these features, we analyzed an Android SDK that aims to protect applications against API misuse.

Frida is one of the Android day-to-day dynamic instrumentation framework widely used to instrument applications. It can address both native code with inline hooking and Java side thanks to ART instrumentation 1.

Frida works at the function level and in some cases we may need to have a finer granularity at the basic-block level or at the instruction level (i.e. have hooks on instructions)

To address this limitation, one trick commonly used is to combine hooking with emulation. One can use Frida to hook the function that we are interested in, then we can dump the CPU context and the memory state of the process and eventually continue the execution through an emulator like Miasm or Unicorn

This approach works pretty well but has a few limitations:

Moreover, while it is quite simple to mock the behavior of strlen, it may be more challenging to mock JNI functions behavior like FindClass(), GetMethodID(), RegisterNatives(), …

The design of QBDI provides a good trade-off between full instrumentation and partial emulation thanks to the ExecBrocker that enables to switch between instrumented code — our function — and non-instrumented code: strlen(), FindClass(), pthread_call_once(), …

This diagram represents the instrumentation flow for the different scenarios:

For those who are interested in QBDI internals you can look at the 34C3 talk by Charles and Cédric 2. There are also examples in the GitHub repository 3.

To summarize, we can bootstrap QBDI as follows:

Among the QBDI tests, we analyzed an SDK that aims to protect applications against API abuses. This kind of protection is used to protect API endpoints against illegitimate uses: emulator, bots, …

To protect the main application, the solution collects information about the device state: rooted, debugged, custom, then encodes this information with a proprietary algorithm and sends the encoded data to a server.

The following figure summarizes this process:

Such architecture is robust and similar to the one in Safetynet 4. On the other hand, the SDK has fewer permissions than Safetynet, therefore it cannot collect as much data about the device as SafetyNet does.

We started the analysis by monitoring the network traffic between the SDK and its server. At some point, we can observe the following request:

It is JSON encoded and the characters that look like random values are the encoded information sent by the device collector.

The analysis of the SDK aims to address these questions:

After a look at the Java layer, we found that the logic of the solution is implemented in a JNI library that will be named libApp.so 5. The library exposes the following JNI functions:

With static analysis, we can identify that the function Java_XXX_JNIWrapper_ca3_14008() is the one involved in the generation of the sequence "QJRR{JJJGQJ~|MJJJ...". It returns the encoded data as a java.lang.String and takes two parameters that are not mandatory: bArr, iArr 6.

The library as a whole is not especially obfuscated. Nonetheless, we find strings encoding and syscall replacement on well-known libc functions:

This technique is commonly used to avoid hooking but the fact is that the given syscalls are wrapped in functions that are not inlined. Hence, one can hook the functions that wrap the associated syscall.

In order to fully understand the logic of this function, we instrumented the function through QBDI 7 associated with a set of instrumentation callbacks.

The purpose of this blog post is to show how few — but well chosen — callbacks enable to understand the logic of the function.

First of all, the native library embedded in the SDK can be loaded outside of the original APK using dlopen() / dlsym(). Moreover, one can instantiate a JVM thanks to the ART runtime (libart.so):

At this point, the jni_func() function is tied to Java_XXX_JNIWrapper_ca3_14008 and ready to be executed in main():

The output seems consistent with the network capture and the value "root: 1" too since we are on a rooted device 8

This code provides the following output:

Everything looks good, QBDI managed to fully instrument the function (which includes ARM / Thumb switch) and the result is similar to the real execution.

Now that we are able to run and instrument the function, we can start to add instrumentation callbacks to analyze its behavior.

One of the first callbacks that is useful to setup is a callback that instruments syscall instructions (i.e. svc #0). To do so, we can use the vm.addSyscallCB(position, callback, data).

It leads to the following piece of code:

Before any syscall instructions, we perform a basic lookup on the syscall number stored in the R7 register to resolve its name.

It results in the following output:

Since we are able to resolve syscall numbers into function names, we can improve the logic of callback to dispatch and print function parameters:

By doing so on the common syscalls number, we get this new trace:

Based on this output, we can figure out how root check (orange area) is done. It is performed by checking the existence of the following binaries:

The function also checks if some directories are present on the device (faccessat syscall):

Especially, it would be suspicious if the directory /tmp were present on the device while it is standard to have /system and /data directories.

Regarding the debug state of the process (blue area), it is done by looking at /proc/self/status. After analysis, the function checks the TracerPID attribute (cf More Android Anti-Debugging Fun - B. Mueller)

Finally, the function processes the output of /proc/self/maps right before to returning the encoded values. It suggests that the data collected by the solution are based on this resource.

In the previous part we got a global overview about how the solution achieves root detection, debug detection and what kind of data is collected (i.e. process memory map).

However, some questions are pending:

Moreover, QBDI is also able to get the effective memory value that is read or written. This feature is quite useful in the case of conditional instructions such as:

To add a callback on memory accesses, we can use the addMemAccessCB(...) function on the VM instance:

In the given memory_callback(...) function, we perform the following actions:

The idea of this callback is to track memory accesses that are performed on printable characters. It enables to quickly identify strings encoding/decoding routines.

Here is the implementation of the callback:

With this new callback, we can observe such output between two openat() syscalls involved in the root check routine:

It is basically the string decoding routine in action. Note that some read operations are missing since we only track printable characters. However all write operations are present.

The routine loads characters with the instruction at address 0x295e and stores the decoded value at address 0x2972. If we look at the function that handles these two addresses, we find the decoding routine:

In the above figure, the green section highlights the memory load access while the red one highlights the write operation. The blue area is the decoding logic.

The output of all read / write accesses turns out to be quite verbose on the whole execution of the function. We can improve the instrumentation by adding two callbacks before and after function calls with this purpose:

The addCallCB(...) is still in experimentation but it aims to put callbacks before or after call instructions:

With these two callbacks we get the following output:

By going further in the memory trace, we can observe this output:

From this output we can infer the behavior of the collector (pseudo-code):

We can also observe a sequence of

It suggests that the logic of the encode() function is implemented at address 0xd2ba.

The CFG of this function is compounded by instructions that compare the input against magic printable values and we manually checked that it is the encoding function. Moreover this function is — by design — reversible since the server side algorithm needs to process the encoded data.

In the previous parts, we targeted the ARM version of the library. It turns out that SDKs which use native libraries usually provide the libraries for all architectures (arm, arm64, x86, x86-64).

Indeed, they do not want to limit developers to some architectures. The solution previously analyzed also comes with a x86-64 version of libApp.so with the exact same interface.

Moreover, the analysis done in the previous sections shows that there are no real dependencies to the Android system:

Thus, we can lift the library and run it on Linux. This technique has already been described in this blog post: When SideChannelMarvels meet LIEF.

In a first step, we have to patch the library with LIEF:

Then, we can instantiate a Linux JVM and run the native function:

By executing this code, we get a similar output as seen in the previous parts:

We can also run the strace utility to inspect the syscalls:

Since we are able to run the function on Linux, we could also use gdb, Intel PIN or QBDI(x86-64) to analyze the library.

While it has been quite challenging to add the whole ARM support in QBDI, it starts to work pretty well on real use cases. Such support should also lead to interesting applications among which:

The raw traces used in this blog post are available here: traces.zip

Many thanks to Charles Hubain and Cédric Tessier who developed and designed QBDI. It is really pleasant to work on the concepts involved in this DBI.

Thanks to the LLVM community to provide such framework without which this project would not be possible.

Thanks to my Quarkslab colleagues who proofread this article.